What is Land-Based Learning and Wellness?

Land-Based Learning and Wellness is an approach to practical and academic learning that fosters growth, creativity, compassion, and wellness in a non-clinical way. It is, by all accounts, a breath of fresh air that empowers individuals to become confident communicators and ingenious problem solvers. By encouraging play, creative expression, and mindfulness, participants effectively discover their belonging as a member of the natural world. Nature Awareness Mentorship provides the safety for fun exploration and observation, the freedom to shake off the stress of contemporary life and gives permission to individuals to be truly themselves.

This approach enhances engagement, provides transformative experiences, and illustrates how unexpected life events can be overcome with out-of-the-box and collaborative thinking. Inevitably, disconnecting from the grid, participants develop meaningful connections to themselves, each other, community, and to the wood-wide-web. These connections foster the growth of internal and external wisdom. Naturally, participants enhance their physical, cognitive, and emotional wellbeing, which in turn sow the seeds for reciprocal and interdependent relationships into adulthood and throughout life. This process empowers individuals to discover the greatest teachers: the ones who reside within the interconnected nature of being. 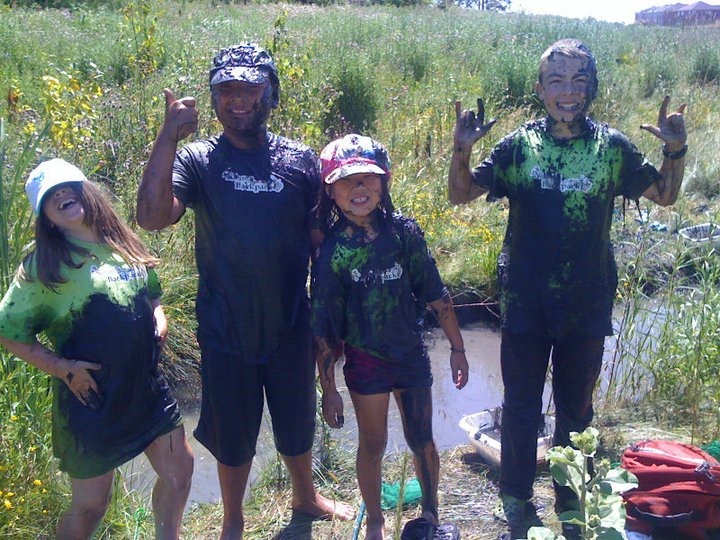 By nurturing our community (our future ancestors of all ages and backgrounds), we help each other to adapt to the ever-changing nature of the world and provide an optimistic outlook for the future with a skillful and fascinating wild life. We empower and create enthusiasm for stewardship, compassion, leadership, life itself. We wholeheartedly believe that this approach bridges gaps between division and challenge, enhances mutual respect, and empowers people to survive and thrive with resilience, courage, and a worldview that perceives the interconnectedness of all life. 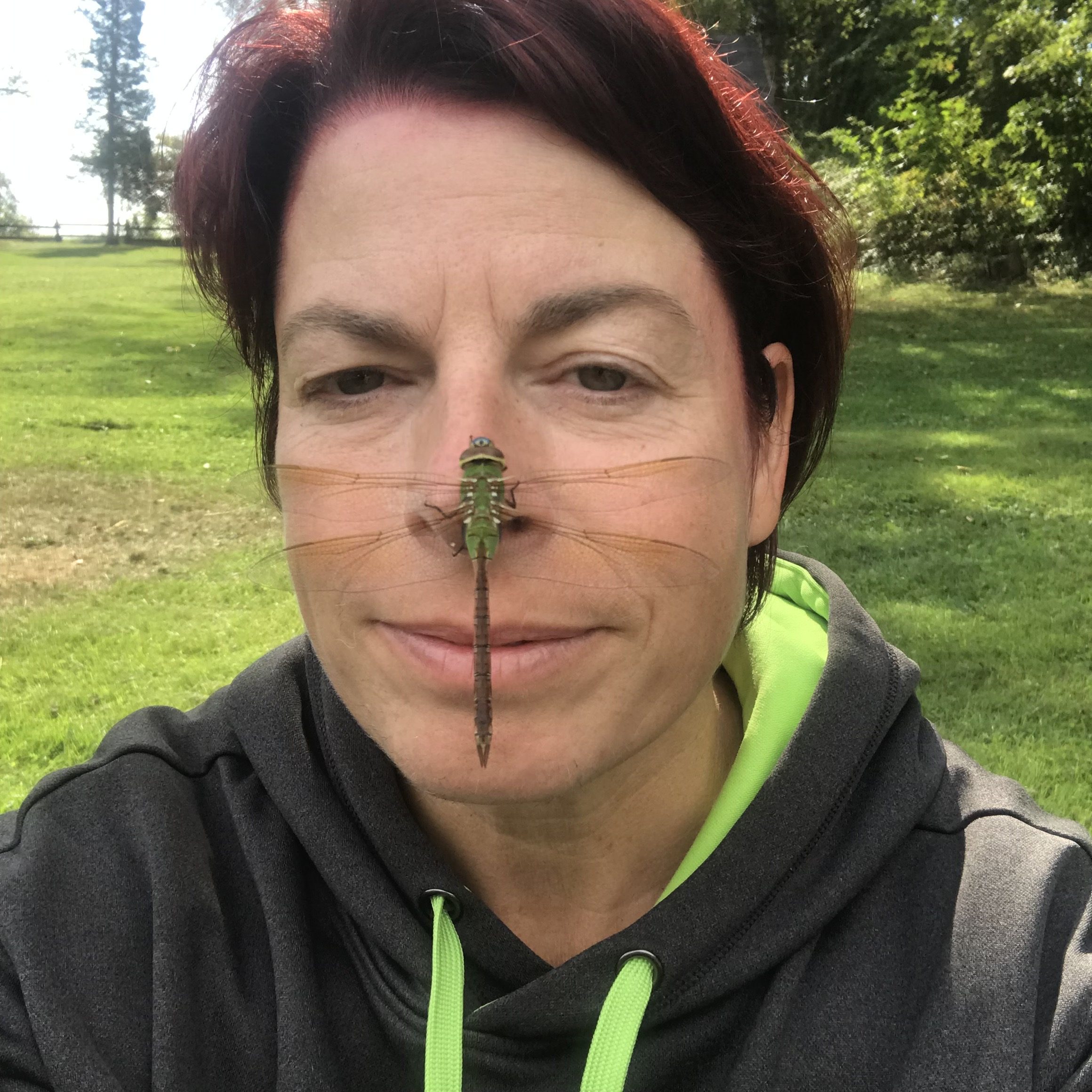 Rhonda Sage-Buffitt grew up on a small hobby farm in Severn Bridge, Ontario. As a child, she could always be found exploring the great outdoors, making forts, lighting fires, catching frogs, making fishing poles out of sticks and eating raspberries (lots and lots of raspberries).

Every spring, Rhonda would bring home a bucketful of tadpoles and raise them in a large aquarium. She would care for the tiny tadpoles by gathering fresh pond water and algae and watch them transform into tiny toads. Rhonda would also bring home big bullfrogs and play with them until one day, Rhonda’s mother had finally had enough. She threatened to cook up frog legs for dinner if they weren’t immediately released. Rhonda quickly set the bullfrogs free, saving them from their pending fate. She has since saved many creatures, including strays over the years.

A self-proclaimed nature geek, Rhonda attended the University of Guelph and graduated with a B. Sci (Agriculture) Environmental Science with a specialization in Aquatic Biology. She volunteered with the Guelph Youth Field Naturalists and various schools across Ontario to introduce nature to the next generation. Her students were often found cheering Rhonda on while she encouraged teachers to eat insects and explore terrestrial and water worlds of insects. She also volunteered as a research assistant for Dr. G. Mackie at the University of Guelph, researching the reproduction of zebra mussels.

After time spent as an interpreter with Mountsberg Conservation, Rhonda found herself in her element entertaining children with puppet shows and nature interpretation of wildlife. The experience was tremendous and the fire within was lit.

With a young family to raise, Rhonda’s life changed dramatically following a field trip to a local conservation area with her child’s nursery school. During the trip, the children and their parents were fearful of nature and the living things around them. She heard shrieks when a fly flew by with parents telling their children to “stay away from the pond” and “don’t touch that”. It saddened Rhonda to think anyone could fear nature. She knew she had to do something, or the next generation was in big trouble.

Rhonda soon began her journey learning about the natural world by reading inspirational books such as “Last Child in the Woods” by Richard Louv, going to meetings with other naturalist groups, and building relationships with like-minded people. She learned about the Art of Mentoring, a weeklong workshop that teaches principles such as how to build communities through nature and the importance of mentoring with elders and intergenerational teachings to build community. She met other naturalists and purchased many field guides to study. She was part of this movement for many years and still participates in gatherings to this day. Rhonda also attended a week-long survival training program at Sticks and Stones Wilderness Awareness School.

Rhonda continued her mission to help children and their families fall in love with nature. She started by launching a free hiking club for families and took them out to local trails and farms. That’s when Nature’s Backpack was born. Its original plan was to offer a backpack with tools to teach families about the outdoor world. It would have real tools, but it was way before its time and put on the back burner. Rhonda’s focus instead was on a program for 3–5-year-olds called “Young Explorers” that she ran at a local park. She was also contracted to run the same program at two early year centres. Rhonda started “Chicks in the Sticks,” an all-female wilderness awareness program. She ran camps in the summer and was a public speaker for many organizations and teacher workshops regarding the importance of getting children outdoors.

In 2014, Rhonda went through a life-changing event and had to close her business. But she never strayed far from doing what she loved most. She went on to work as an educational assistant and kindergarten teacher, eventually landing her dream job of being a Nature Interpreter Educator at the Grand River Conservation Authority. She was once again delivering programs to schools, and she brought her Young Explorers program to the new position while developing a homeschool group. She was a camp counsellor and worked as an interpreter at the Royal Botanical Gardens, Willow Park Ecological Centre, and Peel District School Board.

Rhonda continued her education by taking her Master Naturalist Certification at Lakehead University. She landed a key position with Nature’s Calling Environmental Education as a Forest School Teacher where she developed a homeschool program that ran three days a week. She loved her work but then Covid-19 hit and like so many, she made the move from Ontario to New Brunswick.

Rhonda wanted to get back to her roots of country living and being self sustainable. She soon found a new position with the St. Croix International Waterway Commission as a Youth Engagement Coordinator. She developed the S.T.I.C.K.S. program that runs multiple programs for schools. She also ran a few day camps in the summer.

After sharing her love for nature with countless families and children in Ontario and now New Brunswick, Rhonda had no intention of starting anything new. But she soon found herself being pulled to start up a new branch of Nature’s Backpack in the St. Stephen area. Once again, she felt compelled to share her experience and knowledge about nature with youth. Not only has Rhonda successfully launched Nature’s Backpack programs in New Brunswick, but she has also nearly completed an Early Childhood Education Certification, as well as Forest School Practitioner. In September 2022, she will be opening the Nature’s Backpack Land-Based Learning Centre for children.

Rhonda is now realigned with her life purpose. The young child who once brought home strays and played with bullfrogs has come full circle. What started out as a family hike to encourage a love for nature, has now grown into a passion she can continue to share with hundreds, if not thousands of other nature lovers across Canada. She considers herself very fortunate to be able to share her immense knowledge and experience. 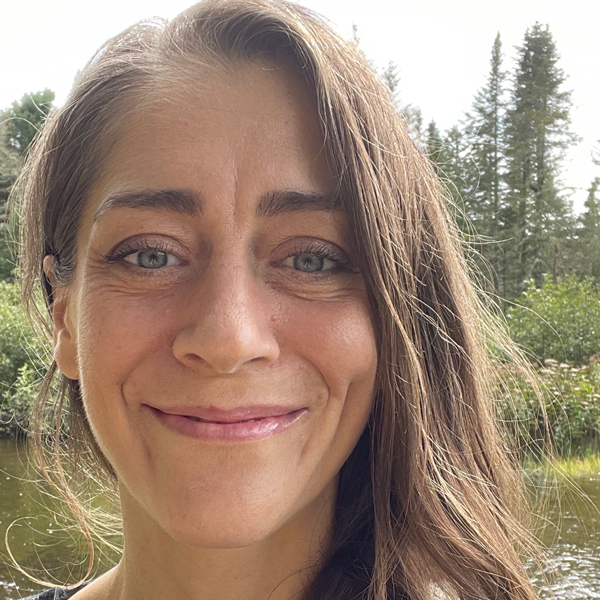 Sarah is an artist, forager, citizen scientist, and entrepreneur. She shares her rural off-grid home and lifestyle with her life partner; A musician and fellow artist. She is excited to bring her unique life experiences, aspirations, diverse skills, and educational philosophies to the position of Land Instructor at Nature’s Backpack.

With her students Sarah is keen to communicate a multidisciplinary approach of inquiry in hopes of sparking and expanding their courageous curiosities. She encourages opportunities for them to experience creative-flow and to build on their ideas by empowering their focus while they achieve their independent and group oriented goals. Sarah incorporates new ways-of-knowing about land by listening with the heart, hand, eyes, and ears, and aims to nurture within her students an emotional connection to the land by promoting their confidence in the safe and constructive spaces created at Nature’s Backpack.

Sarah grew up in the bush and around the water, so it is no surprise that she felt the calling to return to the land as an adult. The majority of her foundational years and many of her fondest memories were spent living on the Arctic Ocean in Inuvik. She pursued her university education at Dalhousie before traveling Turtle Island extensively and returning to settle in New Brunswick.

Sarah recognizes the importance of embracing her responsibility as an ally to Truth and Reconciliation; She participates in everyday reconciliation through self-education, showing up, and the supportive mindful sharing of First Nations, Inuit, and Metis stories, teachings, knowledge, language, and truths. Above all, Sarah plans to be a good ancestor one day. 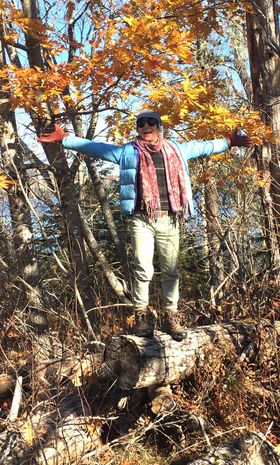 Life is full of many different elements. Avril responds through her art and soul accordingly. The land, sky and water inspire her. Shapes, colours and weather conditions move her emotionally and physically . Movement gives her energy, energy fuels her imagination .Imagination flows into her responses to the elements and into her art world.

Colours give her pleasure and she chooses them, blending the feelings
of all elements she is striving to bring into her art work as she works directly in print making mediums and painting . At times she marries them together.

Her art work is in both private and permanent collections. she has been
exhibiting her art work since 1974 while still an art student at OCAD in
Toronto ON.

During the summer for 29 years she has been giving children the opportunity to experience ‘Av’s Art & Adventure”, day camps where all can experience art making in many forms combined with studio and outdoors , laughter and joy together.

Her newest adventure is a move to New Brunswick and a new studio here.

She is really happy to have the opportunity to be part of Nature’s Backpack ,
land based learning programs. She feels now more than ever it is so important for our children to be outdoors ,becoming stewards of our Earth through exploration , play, creative problem solving, in a hands on approach.

Per week starting at

"My daughter enjoyed the outdoor camp very much. She grew in confidence everyday learning about nature, plants, wild animals and about the safety in using a knife to carve fishing hooks. She taught my daughter lots of things about nature especially about how to make fire."
Michelle
Camper Parent
"Loved being outside with Rhonda who was contagiously excited about nature. My son loved going in the pond with Rhonda."
Jill
Wild Wee Ones Weekly Program
"Camp was great! It was nice that they got to enjoy the outdoors while learning about nature itself! they seemed to really enjoy that week and they tell everyone we see about the camp they went to..... 🙂 The kids are both still telling me things that they learned."
Taylor
Camp Parent

Nature’s Backpack is grateful to live, work, and play in the traditional lands of the Peskotomuhkati Nation within the Wabanaki Confederacy, protected by the living, reaffirmation of the Covenant Chain, known as the 2016 New Wampum: Peace, Trust, and Friendship (Treaty). Canada sits on unceded and stolen Indigenous land – find out more here: https://native-land.ca/ We are committed to the process of decolonization as an action, not a metaphor.